Super sweet creeky III/III+ with a touch of IV. Only runs occasionally. It makes a big difference whether the Town gage is rising or falling. South Sauty must generally be over 2' on the new gage. Check at the Blackoak put-in bridge gage. 0' is really too low, 2" is much better, 1' is meaty, 6-8" or so is ideal. 3' is dangerous but doable by some. We verified that 15" is exciting but runnable. The problem with 15" is a some of the technical character is gone and you end up with lots of hole dodging.

The first mile or so is fairly uneventful. Once a rapid with a boof left appears, the action begins. Only two rapids are definitely class IV, but there is a lot of III+. With the number of strong III's it warrants an easy IV rating at moderate levels. At high levels (>1.5'?), it is a definite IV with some push.

A particularly fun rapid can be called 'the bed'. The bed begins with some big pillows, eddies through the mattress, then you fall off the 5' high endboard. A slide about halfway down often has good surfing. The good rapids come in two parts separated by a flatter section.

The second part has several fun rapids, and two of particular note. One is a triple slot: The left slot is now finally do-able with a slide to the right edge since the tree that partially blocked it for years shifted in the big flood of spring '03. The hardest rapid is towards the end and involves going right to left to avoid a hole and catch a leaky eddy on the left. Watch out if you catch the eddy low, a slot may suck you in. At high water, the hole can take you down and put you through the slot whether you like it or not. It has a semi-distinct horizon line with a narrow line against a rock on the right and a hole upstream of an eddy on the left. A scout is often in order here.

As of summer 2003, there is a lot of wood in Blackoak. None of it requires a walk at 2", but higher levels may require some portages. Most dangerous in the second drop of the bed, to the left of the pillows. There are two bad logs here. Alternate routes exist to the right but a scout may be required. 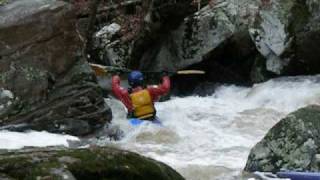 Chris Sherrod heads for the boof left, the start of the first significant rapid at about mile 2 (photo courtesy Sloan Bryan)

Chris Sherrod goes for the left slot at the triple slot. This maneuver used to be somewhat unwise, but is now the way since that log on river left has s (...)

Big rains during the week and the possibility of a total soaker on Saturday eliminated the scheduled trip to the Ocoee, but opened up a vast array of opportunities on the local scene. I talked with a number of people during the week and on Friday night; I had plenty of nibbles, but only a couple of solid bites. I scheduled a standard Sand Mountain preparatory meeting at Hardee's on Governor's Drive for 8:00AM Saturday. By 8:15 only Kevin and Dave had shown up. I was hoping that Mark D' or Gary Holder would arrive to provide at least some vestige of adult supervision. No such luck: we were on our own.

We took off for Sand Mountain under drizzly conditions. The intent was to check out Mark' s new gauge at Blackoak Creek, paddle it if the level was adequate, and paddle Town Creek as a backup. At the Blackoak Bridge, the gauge read 0 inches, the minimum level for a good paddle. By the time the boats were unloaded and shuttle completed, the level was 1.5 inches. The creek was rising. I had a feeling this was going to be a great day.

As we started down the creek, Dave, our capable and competent guide, said he might sort of remember some of the rapids; in any case, I knew a guide of his bore and stroke could handle the scouting operations and would get us home safely. For the first mile or so, things were easy, just some class II shoals and a little flat water. Somewhere below that point, things changed dramatically. We moved into a tight gorge with overhanging trees, big rocks, and lots of fast technical water with plenty of pourovers and drops. The class III and harder rapids came thick and fast; they were so close together that they almost overlapped and gave no break in the action at all. Dave did an outstanding job of scouting the route while Kevin and I tagged along behind. We had a couple of strainers to avoid and three times the creek was blocked and we had to portage. At one of the portages, Kevin avoided exiting his boat by pushing through a narrow gap and sliding off a six-foot ledge.

The whole trip, the creek seemed to be rising. After a couple of hours of paddling, it started to rain. At one point, the rain and mist were so thick that you could only see 50 yards or so in any direction. This was especially difficult for Dave, who was wearing glasses. It didn't seem to bother his scouting skills though; he did just as well half blind as when he could see.

As usual on a Sand Mountain outing, we saw a good deal of wildlife, including a huge Hungarian Flesh Eating Frog that leaped from a tree and invaded Dave's boat and headed straight for his anatomy. It was several anxious minutes before he was able to safely corner it and extricate it from the boat without being killed or worse. A 44 magnum would have come in really handy on this trip

At the end of the creek we passed through a shallow shoaly section and onto Town Creek. After a few wave trains and fast water sections we were on the lake and a mile and a half of flat water. The lake was dead calm with dense green foliage and pink flowers overhanging the shore. The trees and bushes were so thick we almost missed the takeout. The rain had stopped and the air was so still and quiet that when I slapped my paddle on the lake, it sounded like a shotgun blast reverberating off the hills.

The takeout was a typical Town Creek takeout: a hard one. This time was even more difficult, because it was like dragging your boat through a Brazilian rain forest. The thick undergrowth made the path look different and we almost got lost more than once. We made the car just before total exhaustion set in. When we ran shuttle, Kevin and I checked the gauge: the level had risen a foot while we were paddling. No wonder the creek seemed so pushy at the end. I managed to get Dave home in time to get cleaned up before his social outing that evening. I drove home, took a shower, ate supper, and fell asleep on the sofa. It was gratifying to know that Cindi was probably prodding Dave to keep him awake at that moment.