I heard about this creek just north of Gadsden from Josh Tidwell. Thank you Josh. We had spotted it on the topo a year earlier, but said, "nah, the watershed's too small". Wrong we were. Line goes near or through Old Sheffield Gap, Sligo, and the old Cherokee Nation Boundary. This must have been a busy place in the past. It certainly is beautiful and unique for Alabama. A preponderance of the rapids are formed by creek bed rocks rather than rock jumbles, and a lot of the run is bordered by a cliff on one side and a railroad cut on the other. I've not heard of anyone running it (in the modern plastic era, I'm sure Native Americans spent a lot of time here) before we did on June 5, 2001. Feel free to set the record straight if I'm wrong. I think some rafters have been running it once in a while through the years though.

Falling essentially south off Sand Mountain, it is the only significant stream that comes close to flowing off the east 'back' side of the mountain. When we first ran it at 0" (too low), we thought maybe this was all just III+. It is definitely III+ to IV at decent levels, and goes to IV+ above 12". Scouting is easy throughout the run since the stream is seldom more than 50 yards from a rail line. What few logs were in Line were removed in November 2001.

The creek can be broken down into three parts. The upper mile+ is narrow and only carries a fraction of the take-out flow. This somewhat dictates minimum water because the take-out may be OK while the first mile is a hardship. It has several 3-6' drops and slides along with a couple rock jumble rapids. These are all II & III. The middle section has a few braids or splits. Here you go under the Railroad and past some big bluffs. The gradient is OK but no big rapids exist. There are some narrow spots and a few logs so caution must be exercised. Finally you pick up a few tributaries on the right and the steeper section begins. In fact, should you choose to trespass on CSX R/R property, you can save on shuttle time and just walk up and run the lower section. Walking takes about the same amount of time as running the first two miles (~30 min).

The third section begins with a triple drop totaling about 15'. The drops are separated by about 50' each and are quite straightforward. Next is the icebox, a partially collapsed old rockhouse / long undercut. This can be run one way or another depending on level. The stream goes over the normally dry rocks here at high water. A scout and short walk here my be probably required and at high flow you may not be able to paddle next to the cliff. Most of the steep part consists of 4'-10' slides and short vertical drops. The streambed is not too narrow but has steep rock sides so it channelizes pretty well. Two split drops towards the bottom have pinning potential but we have run them left without incident. One drop about halfway through harbors a sticky river wide hole above 8".

A gage on river right at the take-out bridge has been painted. 4" is painfully low, a few more inches is better, and 6"-8" is real fun. At 14", things get a bit serious with sticky holes appearing at the bottom of some slides. You must get to Line within one day after a heavy rain or immediately after a rain of 1.5" or so. It is not on the flow page because all the gages near it respond way too slow because their watersheds are much bigger and longer than Line's. In addition, the area around the gage is eroding a fair bit in early 2003, so 8" today may be a bit higher than 8" was in 2002.

I did Line yesterday (1/21/02) with a few friends. It was running 4" and only dropped 1" while we were on it. The upper slides were very scrapy. Things got better just above the Ice Box. Running the Ice Box was cool. The drops below were nicer than I expected. There were two logs in the upper part which we had to limbo under. I think at water levels around a foot you would not be able to fit under the first one and there was not much in the way of eddies above it at low water. There was also two logs together in the same spot which we had to walk around. This was somewhere at the half way point. - Brian McAnally (Things have not changed much as of 3/2004) 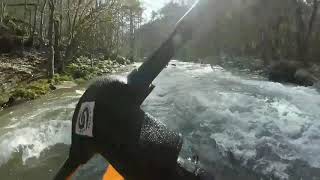 A slide on the upper section. If this is not scrapy, the lower part may frighten even the strong.

Dave B gets himself all sideways above what is sometimes a serious hole.

The toughest drop. I think it is 2nd from the bottom. A hole forms in this washout that can reach out and touch you.

The first triple drop rapid in the steeper last section. We'll have to get creative and name some of these I suppose. This is 0", which is way too low.

The drop at the end of the icebox undercut cliff. Low water.

This may be the same rapid...

"It’s 7:03, you’re wasting cubes!" That was the message on my office answering machine when I walked in at 7:04AM. I immediately returned Mark’s call. I was told to get my ducks in order and meet him in 5 minutes, the creek was running down and we had to get there post-haste.

In a few minutes, we were barreling down Highway 231 as fast as the Dasher’s little wheels could turn. Our destination, Line Creek, flows off the southeast side of Sand Mountain, just down the road from Sardis, if you know where that is.

We checked the level at the take-out. It looked a bit low, but we figured we could get down it if we got started quickly. After changing clothes and a short shuttle we had the boats on the water and were scraping downstream on about a 20CFS trickling creek.

The first mile was awful. We broach-hopped from rock to rock and shoal to shoal. Mark’s quote of the day: "This would be fun if it didn’t suck so bad." As we moved downstream, the creek got a bit steeper and began to channel down somewhat and a few small feeder creeks began to add at least a bit of volume to things.

The second mile was considerably better, at least in a relative sense. It consisted mostly of a large number of slides and drops. It was a bit like running a dozen Powell Falls at 50CFS (we dragged a bit). Some of the slides were near vertical and were even at least a little bit technical.

At the beginning of the third mile we climbed out to scout and photograph an interesting triple drop that was a total of about 15 feet. Mark made me climb up the bank and hang precariously just so I could get a good picture of him running the third drop. From there down, the paddling got considerably better. At one point, all the water flowed into a tunnel between two big rocks and into a massive undercut with a Class III drop at the end of it. Mark thinks this place may be called the Icebox. Unfortunately, some trees were jammed between the rocks, so we had to portage about half the rapid.

The last mile was a hoot. It consisted of several Class III-IV rapids that varied from a five-foot drop with some pinning potential to several slot rapids that were pretty technical in nature. I was happy because, with the volume as low as it was, there was absolutely no push at all. You could paddle up to a drop, look over the edge and then either push or paddle back if you didn’t like the looks of it. The only thing bad about the last mile was it was over too quickly.

With a little bit more water, Line Creek should be a real gem.