Yellow Creek is not so much an outstanding whitewater experience as it is a portal to what may be the most spectacular whitewater scenery in Alabama. I've run the majority of the commonly run whitewater in Alabama, and Yellow Creek Falls is definitely the most visually stunning scout and portage I've seen.

Yellow is not long. The whole run is drop/pool in nature - two of the drops really drop. You used to be able to walk down and scout the first rapid to get a feel for the level, but the landowner has put up a fence so you'll have to take a guess at the level from the bridge, unless a gauge gets painted. The put-in drop is a partially broken down 10' falls usually run on the far right, or perhaps left at high water. At a nice medium low level, this rapid had water going over the flat rock at the bottom and the undercut slab had a pillow (see pictures). The rest of the run can be broken down into three parts: Above the falls, the falls, and below the falls.

All of the rapids above the falls are at most class III+, with two exceptions. The first exception is a narrow undercut slot that simply did not go at our water level. It may fill in at higher water. The very next rapid is a class V, ~25' waterfall that none of us had the soft goods to run. Let us call it 'Vee Falls'. It is a big upstream facing vee slot that would perhaps be best boofed right. The left side is a cave at the bottom and the right side is undercut too. We found a difficult but reasonable portage route on river left, but the much more exciting option is to seal launch off the river-left cliff. If you choose to do so, scout your launch path carefully to avoid the ledge which sticks out about half way down. After this rapid, several more III's follow. When you pass a tributary on the left, heighten your search for the ultimate Alabama horizon line.

Missing the last eddy above the falls would entail at least paralysis and very well would involve passing from this life to another. Assuming you stopped above the falls, you will want to check the opening slide and sheer drop from river left. Once you've had enough, you can walk on the smooth uphill rock and meadow on river left until you get to where the cliff ends. You will be descending through not too steep woods down to the lake, or you can turn right and run the rapids below the falls. In all, the portage only took about 15 minutes once we figured out where to go.

There are about 4 rapids below the falls. We only saw the first two from above, and they looked like sieves at our level. At higher water they may open up. The last two rapids are class IV. The first had a lot of rocks to be dodged and a slot at the bottom. The last is an 8' falls which must be boofed hard right to avoid a rock at the bottom. The paddle across the lake is quite short.

Yellow does not take much water for a creek, and lasts longer than you would expect due to an upstream swamp. We ran it in late winter two days after a rain with the canyon at about 1200 cfs. In the summer, 1500 may be pretty low. Unlike most of the rest of the state, the USGS topographic map that covers Yellow is in 10', not 20' increments.

One final word about the two big portages. Planning is key. Scout out your route without your boat first, then go get the boat. This will save you a lot of time and energy. The walk at Vee Falls is just above brink level on river left, around a rock outcrop, then straight down to the river. It is not long but it is not easy. The big walk is best observed in person. This run is best made in the winter or early spring when underbrush is minimal for obvious reasons.

There is supposedly good climbing in this area... 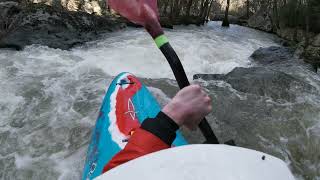 Mark D' on the put-in rapid. In the foreground, a large flat rock is covered by water. The broken off undercut piece of falls to my left has a decent pill (...)

Eric runs a little drop not far below the put-in

I think this is Shane Hulsey on a slide. We stopped here and scouted downstream. Next is...

The narrow slot undercut rapid. You can see the rapid above it that Shane's picture was taken on. There is plenty of room between them. Nice waterspot huh (...)

A close-up shot of the slot. There is a hard-to-see piton rock which sticks out from the left in the outflow, which would likely stop you dead and lead to (...)

There is a great seal launch off the bluff next to the falls, just scout carefully to avoid the shelf which sticks out half way down. Sure beats the porta (...)

Mark D' runs an optional very easy class II that happens to be 75' from certain catastrophe. The Horizon line leads to...

This slide which is just above...

The top of the big one, Yellow Creek Falls, shown here at a weird angle from above.

The view from the top. You can see your shuttle vehicle and some of the rapids below. Not so nice lighting.

Shane executes the proper move at a nice IV below the falls.

Another shot of the same rapid. The stuff upstream is steep and tight, we didn't have time to scout and run it on our trip. (Kellis Kincaid, January 2022)

The final boof into Weiss Lake. Shane hits a sweet line to avoid the piton rock to his left.

On September 28, 2002, the Little River Canyon was still 1500 cfs and falling. On the road trip to the river from Atlanta, we decided to run Yellow Creek after reading the write-up on www.alabamawhitewater.com. We kicked around the idea about running Johnnie's, but that seemed a bit bigger than we wanted to deal with on this Saturday. The website said that 1200 cfs was a minimum to run the Yellow. At 1500 cfs, it was good, but around 2000 cfs at LRC would have been a "great" level. While the run wasn't scrapy, that extra bit of water would have definitely changed some of the drop rapids and how we approached them. By the way, the website photos have more water in them that the level we ran it.

After running shuttle, we walked the boats to the first rapid. It is a sliding shelf going from right to left with a large undercut/sieve on the left side of the rapid. The line looks fairly straightforward. However, as we could put in above OR below the rapid, we elected not to run it. Had someone "somehow" gotten into trouble, they would have flushed, but I guess we erred on the side of caution.

The next little bit was spent boat scouting horizon lines. Surprisingly, this section of the river had good little drops. We finally came to a drop for which we set up rope (on the website, it is the picture of Shane Hulsey on a slide). We set up rope "just in case" due to the undercut on river left. This rapid wasn't a big deal it turned out.

After this drop is a "crack". At this level, I probably should have portaged it, but as I knew that I would probably portage both falls, I elected to run it. This crack is even narrower than middle crack on the Chattooga Section IV. We sized up the boats...my Disco was just narrow enough to make the slot. Unfortunately, the crack was double-undercut at the bottom, so I had my friends set up rope on each side of the crack. To give you a width perspective, they could have given each other a high-five across the crack. I ran the crack and took one last power stroke to make sure the hole at the bottom didn't initially keep me...then I turned the paddle sideways. Evidently, I completely submerged (4 foot drop) and popped right back up. Then...the hole started to "talk" to me. I used my paddle and pulled my boat through the double undercut slot. In retrospect, at this level, I should not have run it, but everything turned out OK.

After this starts portage-from-hell #1...Vee falls. The website indicates you can boof right. I just don't see it. Actually, the move would be more like a right-banking left turn. The falls the day we ran it was very narrow, so it would have taken "perfection" to make the right move. So...we portaged. After schlepping through the underbrush...and there was a lot of it, about ONE HOUR LATER we found a way back down to the river. Our enthusiasm was obviously shot after that portage, but we ran the creeky class III rapids until we saw daylight. Now, I say that I mean, the whole run had basically been in a canopy. All of a sudden, the sky opened up and the sun was right in our faces. Obviously, this meant the world was about to fall out. We got out and, sure enough, there was the last slide above Yellow Creek falls. It's really a shame that the slide isn't about 100 yards back...it looked like a cool run. However, if you run it, you are committed to running the falls. Don't even think about the micro-eddy on river left 10 feet from the lip of Yellow Creek falls...you won't make it!

Another 45 minutes of bushwhacking brought us to the lake. A one-mile run turned into a three-hour odyssey. We paddled up to the rapids below the falls and eyeballed them...they actually looked pretty cool. But after 1 hour and 45 minutes of portages, we decided to go run the LRC Chairlift section while there was still time. In the future, the only part of Yellow Creek that I see myself running is the part BELOW Yellow Creek falls (the part we skipped). This is definitely class IV creeking...

In the winter time, I can see this run being more manageable with portages. Looking at the website photos, there was SIGNIFICANTLY more underbrush in the summer...so, depending on the LRC gauge, it may be worth it.