The Locust is a good learning river, suitable even for first timers below 3.2' with good balance, instincts, and friends. Probably the most popular easy whitewater in Alabama, it should be run many times by aspiring paddlers during their first winter season. The Locust will help you learn to catch eddies, as opposed to the Mulberry, which has good play but is wide and non-technical. Tandem canoes can run this with a clue or luck and some flotation if you want to keep your boat after you swim. Once the base builds up in a decent water year, it runs most of the winter and spring months. 2.2' is pretty darn low, 2.4' is much better. Above 4.0' things get pretty pushy for the unprepared. Most people run from 231 to Rt. 160, but you can take out earlier at Swann Covered Bridge. The upper run is a nice change of pace when the water is over 3'. The late great William Nealy used to live in Birmingham, so you can even find a description of it in his Whitewater Home Companion Volume I. The Locust is comparable to the Nantahala in difficulty, though nothing is as hard as lesser Wesser. Unlike the Nantahala, the Locust is very much drop/pool in nature.

The Locust really only harbors a couple II+/III- rapids, with transition to class III at levels somewhere above 3'. After a few warm-up class II's with a wave or two, the first named rapid is House Rock. It is a straight shot that requires a modicum of right angle or momentum to avoid washing into the big undercut rock on river left. It is extremely easy but folks have washed up under the rock, especially at higher water. If you have the skill and will, there is a nice wave right in the main chute below 4' or so. Next up is Tilt-a-Whirl, which begins as a wide shallow shoal, then hangs a 90 degree left turn with a dynamic eddy on the right and waves on the left. S-turn is just above Double Trouble. It is turns left and is split by an island. Watch for logs - they seem to collect here.

Double Trouble is the hardest rapid on the run. Safety and scouting can be accomplished via the river left island. The main drop requires a body to be able to ferry right to left, or you can just get left. The big eddy on the left is objective #1. The danger element are the rocks with logs on river right. Misguided boats tend to hit the pourover rock toward the bottom right of the first drop, which may cause a swim into said rocks and logs. The second drop is runnable almost anywhere, though a diagonal hole next to the rock on the right may get you if you let it. At high water, you can sneak the whole deal via the channel to the left of the scouting island.

After DT, there is some nice play on a wave/hole combo, then a big wave that is very hard to catch against the river left shore. Bullard Shoal is just above the Swann Bridge, generally starting center/left and working left is best.

Below Swann is not much until you get to Powell Falls. Powell is a 7' slide that is easier than it first looks to the wide-eyed beginner. I always run it about 5-10' right of the center scouting island below 4', but you can run it farther right if you wish. At high water (5-6'+) you can run over the scouting island. A fun (possible park &) play hole is just above the Rt. 160 bridge at Scirum Bluff. Cartwheels are no problem here if you have the game, and at 4.3', loops are also in the mix. Rt. 160 is a short but steep takeout.

Year go people took out at the Nectar covered bridge, which burned down around 1990 or so. A bridge has been built there again but don't bother going there - the section from 160 to Nectar is wide and flat, and the Nectar take-out is not much better than 160 now. It could be a mud pit if it is wet.

To find the Locust from Hunstville and the north, simply get on the Parkway (Hwy 231) and drive south until you go over the put-in bridge just south of Blountsville. From the south, Rt. 79 probably is a good bet. 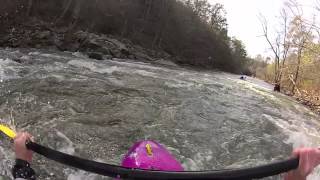 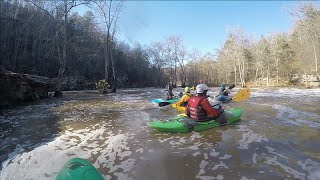 Powell falls: even the college kids can do it. (Kellis Kincaid, January 2022)

A very early rogue sighting at House Rock. That might be Dave B, Murray, and Rob Welch in the eddy but I'm not sure. No Helmets required in 1994, evidently.

Jeff Bowen says "what the heck" as he rides out the first drop of Double Trouble next to, rather than in, his boat. December 1993.

Charlie Stotts in truly rare form way back in 1992 on Powell Falls. Them are muscles and that is a whoppin' big foam block, ladies and gentlemen. Not a sm (...)

Murray and Kay Carroll looking good at the bottom of Powell Falls, 2.6', February 1993.

Murray Carroll tempting fate by running to the right of the pillow rock at the bottom of the first drop of Double Trouble. Note his manly lack of helmet. (...)

No trip reports loaded for this run.