East Fork Flint creek is generally Class II with a few nice exceptions. If you put in at CR 1442, you will encounter 1.4 miles of flat water, class I/II, and a couple large log jams above the CR 1386 bridge. Therefore, I recommend you use the CR 1386 bridge as the put-in. This is a fun run if you catch it with enough water.

10' Vinemont Falls is about 1/3 mile below the CR 1386 bridge. It is not too difficult, though a curler from the left can cause problems. A back ender may greet your landing. The pool at the bottom is large. Several more II's and II+'s are found between the falls and the CR 1375 bridge. Above or around 1', the hole at the falls must be treated with respect.

Below CR 1375, the gradient picks up with a couple honest III's and one possible III+. The 'Enema Within' is probably the trickiest. At some levels it requires a ferry above a drop on river left with a hidden potential pinning rock. The action is fun all the way to the railway. Finally, Carpal Tunnel rapid is just above the tunnel under the railroad tracks. It is a pretty straight shot but could be a happening thing at high water. Watch for a rock towards the left side at the bottom. The paddle from there is flat and sometimes contains a few log jams, but takes only about 30 minutes.

This run features an online Streambeam gauge, which is installed on the same structure (CR 1386 takeout bridge) as the old visual gauge and is calibated to read at the same scale. This gauge makes judging the level a snap before even leaving the house. On the gauge, 0' was a bit of a guess and would be low indeed. 6" is on the low side of medium but still fun. I've heard of one run at 1' 2", and that was good. Mark Coyle thought +/- 6" from this level is the sweet zone. Keep the feedback coming. The put-in road is actually on the same road as the put-in for Mill Creek, CR 1386 (Alvin Something? Rd) becomes Holmes-Drake Road as you drive north. The connection is not shown in the Atlas and Gazeteer.

JD reports on 3/6/04: Lotsa wood between CR 1386 & 1375, some riverwide. One is at the end of the pool at the bottom of the falls. Some can sneak up, but most of these are negotiable. Only one log below 1375, easily seen from upstream, but should be walked.

The hole below the falls is an issue at this level... a rope should be set. 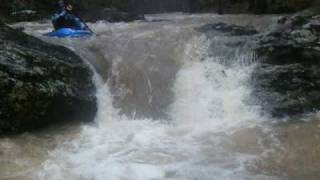 Dave Branham and Gary Holder on a typical rapid upstream of the falls.

Mark D' tries for speed on the falls.&nbsp; This hole could be very sticky at higher levels.

Dave Curry rides the curler to the preferred landing zone.

Downstream of the last bridge, the gradient picks up a bit.

Gary Holder lines up for the main drop on the Enema Within.&nbsp; That dark looking rock at the bottom briefly stopped Lee's momentum in his RPM.&nbsp; (...)

An above view of the Enema. Lance Finley tried to boof off the big rock under water in the center of the rapid. He sorta got spun around. He finished up (...)

Dave B. on a double drop.

The tunnel under the railroad and the rapid just upstream.

The tunnel rapid.&nbsp; This also knocked Lee Foster's nose.&nbsp; This would be really cool at high water.&nbsp; After this, there is nothing but flatwater.

Mark D' has redeemed himself. The mud-bespattered debacle on the Lower Nantahala is now just a bad memory. The East Fork (if you can catch it running) is definitely one of the best introductions to creek boating you can find: 1) less than 40 miles from Huntsville, 2) easy put-in and take-out, 3) short shuttle, 4) excellent Class II-III+ whitewater, some of it technical 5) a 10 foot waterfall, 6) a minimal flat-water paddle, and 7) a Dairy Queen at the take-out.

Five of us, Mark D' (C-1), Gary Holder (C-1), Lee Foster (K-1), Dave Branham (OC-1) and Dave Curry (OC-1), set off from Mark's house into the unknown. To our knowledge, we were the first paddlers to venture down the East Fork. Mark, acting on a tip from Ricky Pollard, had thoroughly researched it on his topo maps and hiked part of it, but this group would be the first to see it full of water. We checked the level at the take-out; it seemed high enough, so we decided to go for it. After a short shuttle on which we were only lost once, we arrived at the put in; the level there seemed low, but paddleable.

The first couple of miles were a bit bony with a few Class I shoals and two short portages around log jams. Several feeder creeks added their water to give us a flow that was now adequate for good paddling. Along the way, we encountered a local who told Mark the magic words: "Nope, I've never seen anybody on this creek in a canoe before. Y'all had better not run over that waterfall, it's a killer." This filled us all with eager excitement.

The creek started to get a bit steeper with more rapids just before we took off to scout the waterfall. It is a pretty straightforward drop of about ten feet with a nice big pool at the bottom for recovery. There is a diagonal curler wave from left to right that ends in a small rooster tail right at the edge of the drop and the hole at the bottom looks like it can be pretty sticky at higher water levels. Mark led the way by boofing right off the top of the rooster tail. He had tremendous speed at the top and landed smoothly beyond the event horizon at the bottom. Ever the paddling mentor, Mark gave all of us lots of advice on the right way to run it: don't catch the eddy, get lots of speed, keep a far right line, bla, bla, bla . . . We all ignored him. Dave, Gary and Lee more-or-less followed his lead but without as much speed. All of them flipped in the foam at the bottom and had to roll back up, Gary with a pretty good back ender. I decided to go to the right of the rooster tail; I had pretty good speed on my approach and the curler kicked me all the way over to the right where I landed cleanly and upright. I was able to chalk up another lucky move on a waterfall.

Below the falls, the creek entered a gorge and got a bit steeper with about two miles of good whitewater. There were several legitimate Class III rapids with one worthy of naming by Mark: "The Enema Within." I'm not sure whether the name reflects on Mark's toilet training, his efforts with Helen's toilet training, or his association with Dave Branham. It's a classic creek rapid that requires a little eddy-hopping, a couple of good ferry moves and has a rock with some pinning potential in the middle of the last drop. The only person who had any problem with it was Lee, who t-boned the rock; fortunately he just bounced off after having his teeth shaken a bit.

The last rapid before the flat-water section is a steep, narrow chute, which flows directly into a tunnel under the railroad tracks. There is one eddy on the right at the bottom that will hold about 2 boats. Running it was simple: "down the gut," catch the eddy on the right. Mark ran first and set up to take pictures. Lee and Gary followed. Gary, having paddled with me before, knew to hide in the tunnel when it was my turn. Lee, on the other hand, didn't realize how much momentum an open boat running at full steam and out of control has. He stayed in the eddy. I ran the rapid and hit the eddy (and Lee) with the force of a professional rassler in a cage match. Lucky for me, Lee is a nice guy and forgave me after several profuse apologies.

After running through the tunnel, we had about 30 minutes of moving flat-water punctuated with a couple of fallen trees. Our only excitement on this section was when Mark decided to have a wrestling match with one of the trees and lost. Fortunately, he managed to extricate himself with no damage and none-the-worse for wear. We finished the trip off in the only manner a perfect trip can be finished: "Fat-Boy" milkshakes at Dairy Queen.

David Pearson and I ran this on Monday at approx 1-2' (1386 bridge). Most of the run was fun. I think that +/- 6" would be best for this run. Lots of wood in the channel between the 1386 bridge and the falls but it was all easy to avoid. I did not want to attempt the falls at this level with only two of us on the run. That hole at the bottom gets verrrry serious. It looks like the left hand line is good if you can break through the curler and get an additional stroke to angle left before going over the edge (reminiscent of 7' falls on the chattooga). The hole at the bottom of the right hand line becomes horse shoe shaped, and not in a good way. With enough speed I am sure you could clear it but it would be a serious thing if you didn't. The rest of the run was fun and fast. The left hand line on "the Enema Within" did not look like a good time. The flow becomes very steep and drops in right behind that pinning rock. The right hand slot had enough water to go through but the line up was bony. The rapid above the railroad tunnel appeared to be bonier than it actually was. Lots of little hidden tripper rocks in there. It would definitely not be a fun swim through that one. Starting left at the top and working right seemed to be a good line. Watch for a hump in the main flow half way down. It looks like a good line but it drops onto the point of a rock (ouch). Up to that point it was a very fun and quick run. At 6" I think that the falls would be runable without serious consequences and the channel would be more technical. Because of the high water we were blowing through a lot of stuff that would take more maneuvering at 6". One more note. Hate, hate, hate that take out. Huge log jam blocks the channel about 200' from the bridge. We had to take out in deep mud and water and bushwhack through briars to the railroad right of way and walk up from there. Other than that it was a great run. Can't wait to do it again.