Pond Creek is the steepest and most adventurous run in the Florence area. It has three runnable waterfalls and many decent rapids between them. It is very creeky and narrow in parts but always wide enough to run. It can be run all year long. At low water it is a scrape but runnable. At high water it is a blast.

It is advisable to have a guide on your first run of Pond Creek if you are not pretty solid on Class IV. There is a potentially very dangerous spot. The put-in is on Wilson Dam Road (Route 133). You are not able to see the creek from the road however due to vegetation. You park your car on the road and walk a path to the creek. You then lower your boat down a steep grade preferably by rope. It is not bad at all if you park at the end of the guardrail next to a tributary just south of where the road widens at the last stoplight before the bridge. The take out is just south of Patton Island Bridge, and once again you cannot see the creek from it. Patton Island Bridge is so new that it is not on most maps. You park your car at the end of the bridge on the Muscle Shoals side. When the creek reaches the Tennessee river you take out on river right at a small walking bridge that crosses over the creek. You follow the trail that this bridge is part of up to the take out. Follow signs for the Rockpile Trail.

The first waterfall is right after the put in. You go through a large tunnel and the drop is at the end of it. It is about an 15-18 foot drop and is clean in most areas. Always clean at high water. There is usually a pool at the bottom of it. There is a rapid after this that CANNOT be swam due to rebar. There is also a tunnel immediately after this rapid with a 7 foot waterfall that drops straight into large rocks. This is a very bad spot. These two areas should be portaged, though a line exists at the waterfall if you are careful and don't mind serious boat abuse. Pins would be easy to come by but the concentrated water in the tunnel sets you up for a good boof stroke. The line is very thin and knowledge of the rocks and their consequences is advisable. As the water gets higher the cushion factor will increase.

After the portage there are a few little rapids until you approach a straightforward 7 foot drop with a small slide above it. Then there are a few more rapids until an interesting 5 foot drop with a nice little two footer above it. The 5 foot drop is a sort of slot on the right side with water coming in on both sides. The right side is undercut. This is fun at low water but has not been run at high water. It is straightforward on the left side if there is enought water. Some of the best little rapids are from after the last waterfall until the takeout, but if the water is low, you are going to scrape.

As of September 2004, there are several logs across the stream which can be limbo'ed at low water and one or two which must be walked depending on the level. None are hard to see from upstream.

The run is short in length but is rarely short time-wise due to putting in, taking out, and portaging. It is definitely a lot of fun. The water quality is very bad at low water but is much better at high water due to rainwater. It is fed by a swampland upstream so it holds its water decently when it is up. It takes a big rain in Florence/Muscle Shoals for it to be at high water. 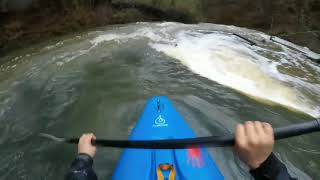 A slightly bizarre view of the first drop, a 15' waterfall, from the lip (photo courtesy Dave Curry)

The often portaged pigpen of rocks at the end of the second tunnel. You can't see it, but Mark is pointing towards a thin line. (photo courtesy Dave Curry)

Mark called me at about 11:30 AM on Sunday. It had just stopped raining in Muscle Shoals. Pond Creek might be up. I was ordered to get my stuff together and meet post-haste. This was “new water” with waterfalls and we couldn’t miss the opportunity. I dutifully loaded the Whitesell on my car and met him by 1:30 PM.

By 3:00 we were looking for the put-in and takeout. After a couple of passes, we figured out where the creek was and made a good guess at the take-out. The put-in was easy to find. It was just off the road at the confluence of the creek with about 50 cfs of toxic waste from a factory on opposite side of the road. It looked like we had enough water so we unloaded and got ready.

The factory effluent ran down a pretty steep slide into the creek from its outlet pipe. Mark initially wanted to run it, until he noticed it was full of broken rock and rebar. We changed our minds and lowered our boats to the creek. There was just enough water to keep from scraping. The creek was just barely wide enough to turn the Whitesell around to catch an eddy; this would prove to be a bit of a problem later.

The first rapid consisted of a lengthy tunnel wit a horizon line at the end. I climbed out (with camera in hand) and scrambled over the top to check things out. It was an 18-foot waterfall into a nice clean (obstruction-wise) pool. I yelled back up the tunnel for Mark to come on. He ran the falls cleanly while I dutifully took his picture. I lowered the camera to him and dutifully followed.

The next rapid was an even longer tunnel with a similar horizon line at the end. I barely turned around in the creek, caught the “eddy of last resort” and held onto a rock to keep from washing into the tunnel backwards. The tunnel was really long, the climb up looked difficult, and I couldn’t get out of my boat very easily. Mark thought about if for a little while and then paddled down the tunnel and disappeared over the horizon line. I saw him give the OK sign with his paddle; he then gave me some “mixed signals” as to what to do. I knew he was OK, but I couldn’t tell whether he wanted me to come ahead, stop, run left, or run right. I thought about it for a few seconds and then peeled out and into the tunnel. When I hit the drop, I heard some crunching and grinding and got kicked around by some rocks on the way down. It was nasty, but I made it safely to the bottom without pinning. All-in-all, it was probably easier to run it than make the portage through the briars in shorts.

The rest of the way was pretty easy with a few more uneventful waterfalls to run and some shoals. The creek was remarkably devoid of play spots. The carryout is about 400 yards, all uphill.

The paddler’s guide on AlabamaWhitewater.com rates Pond as a “2 chicken” creek for cleanliness. My estimate was closer to 4 or 5 chickens. It might even qualify as a “Super Fund” site. (Mark: “My bad, the number of the counting shall be three”)