A tributary to the Calvert Prong, this creek is ultra-tight and needs recent rain. The first mile is flat. After you pay your dues by ducking under, paddling over, and walking around logs as you pass by the Oneonta sewage treatment plant (joy), you will be rewarded. Once the gorge is reached, the action is immediate. The best rapids are at the top. Perhaps 3 to 5 class IVs are separated by short pools or eddies. Scouting may be advisable to avoid missing eddies. After the bigger ones, the action subsides to tight class III. I think the first major rapid will be dubbed Hepatitis A, B, and C. The second is Les Amis (some of you may get this...). The next rapid is split by a long island and is not steep, but is fun. A bit further the creek goes over a small drop with a vertical rock wall on the right. The second half of this rapid is a fast sweeping right turn with a boof at the end.

In early 2001, several of the steeper rapids had logs in bad places. Most of these were cut out in November 2001 down to the Faulkner Road bridge. As of May 2003, there was only one log in the rapids section. It is easily spotted from upstream. Further down some hardwoods were cut out several years ago and then a power line crosses the creek. The power line is amusing in a sad way. It had to be cut in at great expense in the late 90's because the homeowner could not get permission from a family member to go across their property.

Chitwood is improving but still rates 3 chickens. It used to really peg out the water quality chicken meter when Wrangler dropped in up to 500,000 gallons a day of jeans washing waste. The plant closed in February of 2002 so they can pollute Texas and Mexico. Oneonta still puts in about 200,000 gallons/day of sewage waste, so it is not just chicken.

The put-in is a bridge on a side road off CR 1 just upstream of the sewage treatment plant. The lower take-out is on CR33 just off the top of the topo map linked above. The Faulkner Rd bridge is the preferred take-out at about mile 2. This avoids some decent but less steep paddling down to CR33. The gage is on the CR33 take-out bridge. 0' is truly minimum, you really need several inches more to have a good run. 1' is a hoot and just about right. 15"-18" would begin to get out of control. 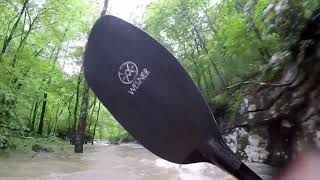 Dave Curry in a tight spot in Hepatitis A, B, and C, the first good rapid, scratching up his new boat.

Wade towards the bottom of Les Amis. The tree that made us walk it is now gone.

Wade back in his boat.&nbsp; Clearly more water was needed.

Not the best shot but when it is your camera, scanner, and website, you get in at least one picture, dammit.

This flows south out of Oneonta past their sewage treatment plant (do we see a pattern developing?). Wade Amis and Dave Curry were the principals. We left work about 9am after a late night rain. More rain occurred to the south so we headed there to meet Wade. Chitwood is a tributary to the Calvert Prong. It is due south of Cleveland, not far from the Locust put-in. The run is only three miles long, and is flat at first, then has a mile that drops 100'. Dave was nervous, and really got nervous after Wade pinned. Wade pinned heads-up facing downstream, so he was OK, but he was going nowhere. He could have punched, but he was at the top of a rapid that had a tree at the bottom. The water was low, so he was probably OK swimming, but it was not an attractive option. Dave and I went into action without discussion and set up a static line from the two banks. After some struggle, we finally got he and his boat full of water to shore. This little episode illustrates two things: 1) Don't flush into rapids you don't know if you don't have a sure thing eddy in sight and 2) know how to deal with pins. We set up the static line quickly and that helped. This will be a really cool, short run when the logs are removed. It will have about 3-5 class IVs and a bunch of III. Recent heavy rains are required.