Railroad Fork is a micro tributary to East Fork Flint Creek. It is the only run in Alabama for which I really don't know the official name, because I can't find it on any map. Perhaps it is simply the upper reach of Flint Creek. There are 9 'unconventional river features', namely tunnels under the railroad tracks. These vary from 4' off the water level and 30' long to 15' off the water and 250' long. It's a different and very cool boating experience. We first noticed it when we were paddling East Fork Flint Creek and saw the long tunnel 0. We noticed that a lot of water had been through there and a pretty good looking drop was at the other end. About 13 months, one scouting trip, and a wood chopping trip later, we were on it.

The rapids are mostly II and III until the last 1/2 mile or so which is continuous cool IV with hints of IV+ from their continuous nature. It is a drop / pool run but the pools get scarce below tunnel 1. Recent heavy rain is an absolute requirement because the watershed is tiny. In fact we ran it during the rain and it worked out nicely. For this reason it is not on the flow page. It may be hard/impossible to see from the road, but about 5.5 blocks (**see pictures) showing on the downstream river left side of Tunnel 9 was a good level. It gets a lot higher than this during deluges but only briefly. It would scare me at these levels.

There are 9 tunnels or bridges on this run. We numbered them backwards starting at 0 because we cut out most of the logs from the bottom up in October 2001. Therefore you put-in below #9 and the confluence with EFFC is just after #0. The tunnels are all clear as of 12/2001. There are still a couple logs to contend with and innumerable 'stubs' sticking out from shore, so be careful. We only had to walk the logjam downstream of tunnel 7 on 12/13/2001. It took us only about 40 minutes to get down to tunnel 1 where the real action begins. A run breakdown by tunnel section follows:

| Tunnel # | Tunnel Name | S* | Downstream Section Notes |
|----------|-------------|----|--------------------------|
| 9 | Put-In | R | Put in below this tunnel just downstream of CR 1398
| 8 | Nothing interesting | L | Watch for a log parallel with the current next to an island
| 7 | 'CBM' (spray painted on d/s side) | R | Downstream of #7, there is a logjam next to a bulldozed road that has to be walked
| 6 | Mundane | L | Watch for Geisha (III), a slanted slide into Tunnel 5. It can be run a variety of ways, but is the first interesting rapid. It is semi-tight just above the bridge, this slide drop is slanted from right downstream to left just feet above the bridge.
| 5 | Geisha | R | This section is bouncy but goes fast
| 4 | Arches | R | A picturesque old double arch stone railroad bridge
| 3 | Box Canyon | L | L to R 'Box Canyon' just below tunnel 3 (III). I think I remember a good rapid into tunnel 2.
| 2 | Rapid | R | Decent Rapid right into tunnel into tunnel 1 (III) The rapid is very straightforward but at good water the water in the tunnel is unexpectedly turbulent.
| 1 | Meat | L | Tunnel 1 is immediately followed by a 6' drop into a long shallow slide that curves left to right that will feed you left into an undercut, rocks, and trees. Staying right after the drop is key. The rapid then continues to the right, then left, and ends with a good drop. It's a IV. It is wise to scout the drop below tunnel 1, starting at the downstream river left eddy just past tunnel 1. The next rapid, which is hardly separated from the first, has several drops with fair eddies in between. It is long but very easy to scout from the rocks on river right. I'd give it a IV+ just for it's length. Finally there is a small slower 50 yards followed by Oblivion, which leads directly in to tunnel 0. Oblivion can be run basically down the middle with a right turn at the end if you wish.
| 0 | Confluence | - | Long one into East Fork Flint Creek. This tunnel is so long, you can't see squat in the middle of it except for the light at the end because your eyes won't be adjusted.

CR 1398 is not on the Delorme Maps, but it is on Mapquest. CR1398 is just south of the Dynasty Boats factory off Hwy 31. The best put-in is downstream of the CR1398 bridge on river right though the trees. Hiking out and scouting can be facilitated by the railroad tracks. The take-out is on East Fork Flint Creek at Wilhite Rd. 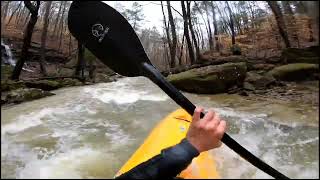 No trip reports loaded for this run.