Cliff White first clued me in to this run. Kelly Creek is short, small, fun, and very close to Birmingham. The good part begins in Kerr Gap just off I20 exit 147, east of Birmingham not far from Moody. It is somewhat similar to Chitwood, but runs longer due to an upstream swamp. The swamp acts like a sponge, making flow peaks less severe. I agonized over whether to list this as a III or a IV. The vast majority of the run consists of class III's, but there are a couple rapids that are at least III+'s and may be solid IV's at some levels.

There is a short warmup after the Hwy 78 bridge, then the class II and III begins. You pass under a railroad bridge, and the drops get gradually bigger. There are a couple easily avoided undercuts. The rapids are all drop/pool. Two of the rapids towards the end are fairly large and might be IV or IV-. It's hard to characterize the boundary between III and IV on micro creeks. Do yourself a favor and don't go downstream of the first Winnataska Dr. bridge. Below there lies only Gum trees and flatwater as far as we could tell.

Kelly has been retrofitted with an online gauge courtesy of Streambeam, which can be accessed via the link below. This gauge updates several times per hour and is located at the takeout, giving an excellent idea of current flow conditions. Current correlations indicate 0.6' on the Streambeam gauge is a minimum, and upwards of 0.8' is decent flow. Additional visuals of the put-in gauge are welcome and can be submitted via the Streambeam web site to solidify the correlation between the physical gauge at the put-in and the SB gauge at the takeout.

If the Streambeam gauge is down due to maintenance or server issues, Kelly Creek does host a USGS gage many miles and tributaries downstream. It seems that about 1500 cfs on the gage is a good low/med level. We ran it with about a 2' air gap under the put-in bridge river left piling horizontal cross member.

If you follow Winnataska Dr. to the next bridge downstream, you encounter Camp Winnataska. Next to the camp is a big 30-35 foot two part slide falls. To run it, you would have to do a 4 mile bridge to bridge (Winnataska Dr. to War Eagle or CR27) run because the folks at the camp are not going to let you take out on their land. I think this stretch will be quite flat except for the falls. There is something called Dukes Mill at War Eagle Rd, so perhaps there is another feature there to be investigated. We felt that 1500-2500 cfs would be a good level to run the falls. 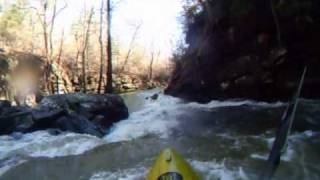 Brian McAnally on a rapid at the beginning of Kelly

Brian looks back at the playspot he just left at the bottom of one of the two best rapids.

Henry DeWald lining up the boof on the second rapid. (Henry DeWald, March 2022)

Greg looks like a doofus here, which is too bad because he just got done catching major air off a boof. My shutter was too slow, and I would normally not (...)

Brian on a slide towards the end of the good stuff.

Ben finishing the slide at the bottom of the third rapid (same as above). (Henry DeWald, March 2022)

Another new run in with new friends, Jason and Daniel. We put on at 2pm Friday. The run was very short. It seemed like we were at the first of the two more difficult rapids in just a few minutes. Since the bottom could not be seen from the top we took a look to verify the best line and no wood obstructions. The first we entered middle left and ran left through the bottom two drops. Fairly straightforward Class 3+. The right side looked to have some pin potential so we chose to avoid it at this level.

The next required a look as well. Nice entry on the river right followed by paddling river left of the center boulder. Then the object would be to angle the boat to the right and drop into the hole sideways to avoid slamming into the wall. Then it will naturally surf you out the bottom with a little assistance. All went well except I didn't get the bow back to the right before hitting the wall head on...this was followed by surfing the hole out the bottom upright. I didn't set a very good example but Jason and Daniel both nailed it. Both these rapids looked like more lines would open up and the difficulty may decrease with additional water...

The last good rapid was a 2 or 3 foot drop with two slots to choose from. The right one is cleaner. After the drop is a little slide followed by about 10 feet of boogie water culminating in a nice easy slide. I ran the left slot and got caught on a rock that turned/flipped my boat upstream to the hole sideways on my offside. I couldn't/didn't get in the set-up position to roll so I bailed. Unfortunately my left leg got stuck in the boat so I got dragged down to the short boogie water stretch with one leg stuck in the boat. In hindsight maybe I could have switched hands and tried an offside roll... I finally got the leg out when I hit the boogie water and let the boat run the slide sans boater. Some fast boulder jumps and a short swim later I got the boat and took it back up for another run. You just can't let boats get away with that sort of behavior. :). The rest of the run was a long tree slalom trying to follow the best flow.

We then went to Camp Winnataska for a nice falls run. This is usually not possible due to the Ranger who lives next to it (he was on a cruise). It's also good to know someone with a key to the gate! This is a nice 30+ foot slide ending with some offset holes on the bottom left. At 1400 the best route was RR down the tongue then up on the rooster tail at which point the water shoots you left over an 8 or 10 foot drop landing in some nice soft holes sideways. All had good runs; a truly fun drop. It reminded me of the big slide on Johnnies but shorter.